Collective Projects contain initiatives of members of the School for collaborative activities, current research on the Abbasid period of School members, and international research projects in progress. Click on the project titles to read more about the project.
Putting the House of Wisdom in Order The fourth Islamic century (roughly the tenth century CE) witnessed a proliferation of texts that aimed in one way or another to codify and render accessible the scientific and literary production of the preceding Islamic centuries and of the pre-Islamic cultures whose intellectual heritage had entered the purview of Arabic scholarly tradition. This project aims at a chronologically focused effort to understand the specifics of the new drive to classify and arrange that we see in the fourth century, and seeks understand the motivations for, and manifestations of the phenomenon.
Read more (pdf)

A Digital Corpus for Graeco-Arabic Studies

The corpus now comprises about 230 texts, three fifths of which are Greek, the rest Arabic. They include Greek philosophical, medical and scientific works, Arabic translations, commentaries and several important Arabic secondary and bio-bibliographical sources. The word count currently stands at ca. 1.2M Arabic and 3.3M Greek words. The texts can be viewed individually and side by side, searched and downloaded from the Digital Corpus website.

The Leverhulme Network is set up by Fanny Bessard (SOAS and St Andrews) and Hugh Kennedy (SOAS) and is is being generously funded by the Leverhulme Trust. The network will last over three years from January 2015 to January 2018 and is intended to bring together scholars interested in the economic history of the Islamic Middle East c.750-1050 CE. In a series of three, full funded international conferences. The papers from each conference will be published in individual volumes.

Cambridge University Library has digitised a selection of Islamic Manuscripts fro m its Near and Middle Eastern Department. This collection includes several important early Qurʾans written in the Abbasid period. The Digital Library provides excellent quality images that can be downloaded and reused under a CC non-commercial licence. Philosophical Concepts and Linguistic Bridges is an ERC project (European Research Council Ideas Advanced Grant 249341) on the transmission of the Greek philosophical texts to the Arabic-speaking world. Currently, the following three teams are at work: The Library of Arabic Literature is a long-term project, funded by a grant from NYUAD’s research center, the NYU Abu Dhabi Institute, will initially publish 35 English translations of the great works of classical Arabic literature. The translations, rendered in parallel-text format with Arabic and English on facing pages, will be undertaken by renowned scholars of Arabic literature and Islamic studies. The translations will include a full range of works, including poetry, poetics, fiction, religion, philosophy, law, science, history and historiography.

LAL will be directed by a group of distinguished scholars from around the world. Philip Kennedy, Faculty Director, NYUAD Institute, will serve as the General Editor; James E. Montgomery, Professor of Classical Arabic at Cambridge University, and Shawkat M. Toorawa, Professor of Near Eastern Languages and Civilizations at Yale, will serve as the Executive Editors. Julia Bray (University of Oxford), Michael Cooperson (UCLA), Joseph E. Lowry (University of Pennsylvania), Tahera Qutbuddin (University of Chicago), and Devin Stewart (Emory University), comprise LAL’s Editorial Board. These eight editors will be involved in the selection of the texts, the commissioning of the translations, the review of manuscripts, and the vetting of the final translations. In addition, a twenty-six member International Advisory Board will provide the Editors with guidance and direction as the project moves forward.
Read more

The Early Islamic Empire at Work

The View from the Regions Toward the Centre

The aim of this project is a better understanding of the political and economic workings of a pre-modern empire, the Islamic Empire (660-940 C.E.),which stretches over almost the entire Hellenistic-Roman world from the Atlantic to the Hindukush. The project is a systematic attempt to explain the functioning of the empire from its regions and the brokering and management abilities of the caliphate and its various elites.

The project looks at five key regions, North Africa,Bilad al-Sham, Northern Mesopotamia, Fars and Khurasan, establishing the changing political and economic structures and chronologies, at once identifying trans-regional political, military, judicial, and indigenous elites. It is to be expected that the central caliphal government shows itself in a more conscious role as moderator between the regions.

In order to shift our understanding of the functioning of the empire to a region-driven view, a multidisciplinary and multilayered approach has been chosen. Parallel to but independent from literary sources, centre-based chronicles and biographical dictionaries, other sources are used as well, such as sequences of coins, the results of archaeological excavations, and regional surveys, together with a data-base study of elite groups connecting the regions with the centre.
Read more

What made the early Islamic empire so successful and have we missed a key part of the story by neglecting crucial evidence? The 7th-century Arab conquests changed the socio-political configurations in the Mediterranean and Eurasia forever. Yet we do not really know how the Arabs managed to gain dominance of this vast ethnically, religiously and linguistically diverse area which had its own, long imperial traditions, and to make this a sustainable enterprise. What built the empire, and what held it together?

Scholarship to date has overwhelmingly relied on ‘literary’ sources in Arabic (e.g. chronicles, legal treatises, theological tracts) composed centuries after the conquests and shaped by court politics at their time of writing. This has created a false impression of the embedding of Muslim rule as a top-down process, directed from the centre, built on military coercion and control through administrative systems. Now, however, ‘documentary’ sources in multiple languages on papyrus, leather and paper from all over the empire (e.g. letters, contracts, fiscal accounts, petitions, decrees, work permits) are becoming increasingly available. These sources, whose impact has been limited by linguistic and disciplinary boundaries, offer a direct, contemporary view of how the empire worked on the ground, and how political and social structures were experienced, modified and appropriated by its subjects.

This project uniquely incorporates available documents reflecting Muslim rule from the first 400 years of Islam, to reconstruct the system of social relations that enabled the crucial transition from a conquest society to a political organism that survived the breakdown of central caliphal control, and remains the region’s benchmark model today. It will critically advance our understanding of a world-historical event, make a radically new contribution to empire studies, and connect and synergise area studies and disciplinary inquiry.

In particular, this project aims to place the analysis of documentary sources into conversation with the analysis of literary sources, especially letters preserved as documents with letters cited in books. Among other sources, all members of the EmCo team focus in some way on letters (in Arabic, Coptic, Greek, Bactrian, Sogdian and Pahlavi) as tools for redress, instruments of power, or generators of social dependency. By analysing both the form and function of letters as well as the rhetoric of persuasion and justification, members of the team show how even isolated or fragmentary documents can help illuminate the social history of the people who sent them and the institutions and structures within which they moved.

For up-to-date news about events and research, and regular blog posts with eye-opening insights from the research of the team, please visit the Embedding Conquest project website on Humanities Commons:
Read more

The MOOC (Massive Online Open Course) The Cosmopolitan Medieval Arabic World, focusses on the Medieval Arabic World, with special attention for 9th – 10th century Baghdad. It offers students from all backgrounds an easy introduction, but contains plenty of information to also keep more advanced students interested. The course can be taken for free by anyone with an interest in the topic; to do so you need to register with a free account for the coursera platform. The course is made up of 5 modules namely: The Medieval Islamic City; Travel & Religion; Trade; Power Play; Science. Feel free to use the videos or any other material in teaching. The fifteenth conference of the School of Abbasid Studies took place from Tuesday July 12 till Saturday July 16, 2022
at Oxford University, UK. 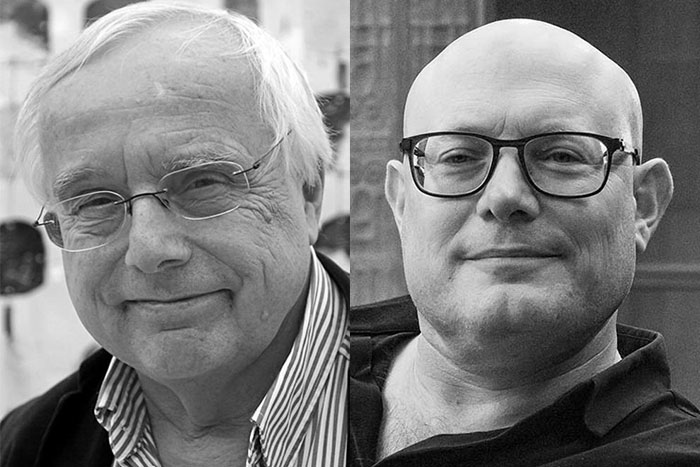 Alastair Northedge, Paris-based British professor, researcher and archaeologist best known for his surveys of Samarra, is 2020 laureate of Tamayouz Excellence Award’s Special Recognition Award.
The Special Recognition Award aims to celebrate and recognize contributions to humanity, architecture and the built environment and is presented annually to individuals or organizations.
Read more » 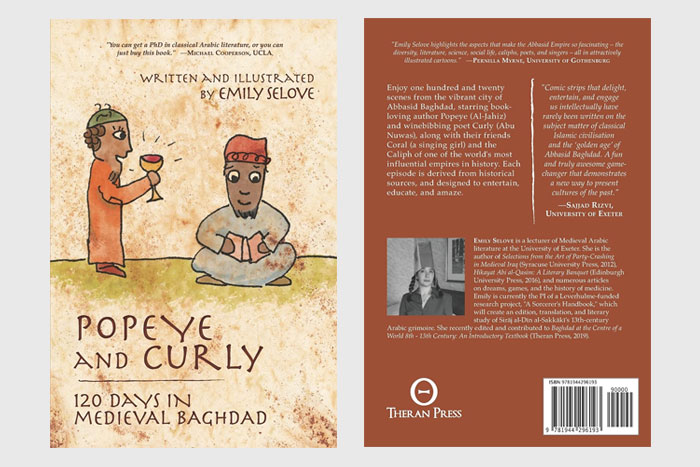 Popeye and Curly: 120 Days in Medieval Baghdad
Written and Illustrated by Emily Selove

Popeye and Curly is a book of cartoons about Abbasid Baghdad, starring book-loving author Popeye (al-Jahiz) and winebibbing poet Curly (Abu Nuwas), along with their friends Coral (a singing girl) and the Caliph of one of the world’s most influential empires in history. Each episode is derived from historical sources, and designed to entertain, educate, and amaze.

It includes a short preface by Geert Jan van Gelder, as well as a bibliography and index. The full-colour pictures are inspired by illustrations of al-Hariri’s Maqamat.