The Muslim Empire during the Abbasid dynasty far from existed in isolation — it occupied, literally, a central position in the civilized world. To the north and west lay the Byzantine Empire with whom the Abbasids had constant contact, most often in the form of war, but also as trade and intellectual exchange. Looking further west, they only had sparse contact with Western Christian Europe, but this would change drastically with the advent of the crusades in the late 11th century. Turning eastward, the seas and the silk road gave the Abbasids avenues into the great civilizations of India and China. They even had some degree of contact with the people in the far north beginning to identify themselves collectively as the Rus (resulting in a travel log that would become the basis for a B-grade movie of the 20th century, The 13th Warrior, 1999).

The Abbasid empire was interested in the world around them and what it had to offer. Ideas and goods were brought in from the known corners of the globe — mathematics from India, silks from China, Greek and Roman manuscripts from wherever they had been sequestered. There was a whole genre of geographical narratives describing far off places. Contact was not always peaceful, though: the empire was almost constantly at war with the Byzantines and, occasionally, there would be calls for war against the infidel in some other place Islam had not yet penetrated. A discussion of the Abbasid empire cannot be complete without consideration of its interactions with the lands and peoples beyond its borders. 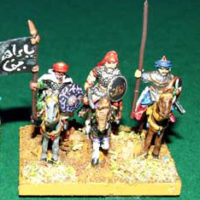