An innovative, sophisticated clothing fashion developed during the Abbasid period. While this development in fashion began during the Umayyad Dynasty preceding the Abbasids, its genuine cosmopolitan style was realized at its finest during Abbasid reign by the founding of the capitol city of Baghdad in Iraq, the rise of a bourgeoisie, and the circulation of the notion of adab — an ideal of urban courtesy and refinement that encompassed etiquette of dress. Among the cultured class there arose concern about appearance, and the elite began to care about elements of fashion. Many people no longer observed pious distaste for materials such as silk and satins. Several new garments and fabrics were introduced into common use. Overall, the influence and importance of fashionable clothing style flourished during the Abbasid period.

The development of fashion was largely shaped by the emergence of a Persian secretarial class as trendsetters of taste and style. The prominence of this Persian influence increased during the Abbasid period. The government bureaucracy was filled with Persian officials who would inspire high society with vogue trends. An example of this Persian influence is provided by the popularity of the caftan, which is a robe with sleeves that button down the front. This Persian article of clothing was introduced during the Abbasid period and was soon popularly used throughout the Arab world.

The Persian secretarial class was not the only group that defined style. Just as celebrities of modern times tend to create fashion fads, the Abbasid caliphs and the women of the harem were also key trendsetters during the ancient Islamic era. The caliph Muʿtasim (r. 833-842) was notable for his desire to imitate Persian kings by wearing a turban over a soft cap. The populace emulated their ruler by adopting this headgear, calling it muʿtasimi in his honor. Additionally, one of the most notable female trendsetters was Zubayda (d. 831), the wife of the caliph Harun al-Rashid (r. 786-809). She was the first to introduce the fashion of wearing sandals embroidered with gemstones. Additionally, she was the first to use palanquins (a covered chair carried on poles on the shoulders of four or more bearers) of silver, ebony and sandalwood, decorated with clasps of gold and silver, hung with sable, brocade and red, yellow, and blue silk. Zubayda’s most luxurious clothes were made of the varicolored silk called washi. A single length of this silk, designed for her, was said to cost a staggering 50,000 dinars.

Accordingly, textile production was a major industry during the period. Clothing was extremely costly in comparison with other common goods. Fine outfits for men in Iraq during the Ninth Century varied in price from five to thirty dinars. (In comparison, a skilled laborer at the time was paid between one half and one and a half dinars per month). Textiles and garments were imported to Baghdad from foreign lands. Oilcloth rain-cloaks arrived from China and from India came a long piece of sari-like cloth called a futa that could be worn as a loincloth, apron, or head covering. Because of the large market for trade, some textiles were known for their place of manufacture. The fabric called ‘attabi, which would eventually become the English term Tabby (plain) weave, received its name from the district of al-Attabi in Baghdad where it was produced. 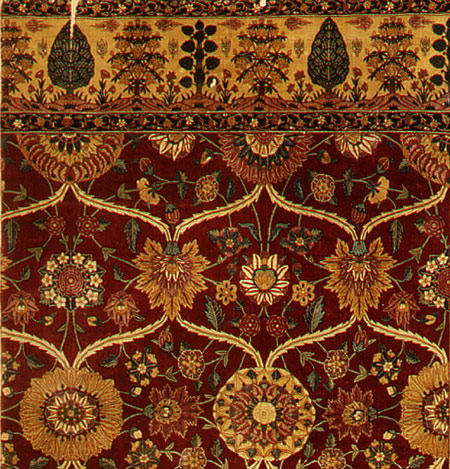 The wardrobe of caliphs

The caliph al-Mutawakkil (r. 847-861) also gave his name to a fabric. Furthermore, luxurious attire and lavish fabrics were a valuable component of a caliph’s property. Caliphs possessed vast amounts of clothing in their wardrobes. During his reign, al-Amin (r. 809-813) ordered an inventory be taken of all clothing, furnishings, vessels, and equipment in the caliphal storehouses. Among other fineries, the inventory showed that the storehouses held 10,000 caftans, 5,000 kerchiefs of various materials, 50,000 ordinary suits of armor, and 10,000 helmets. Moreover, caliphs gave garments away as gifts of distinction. The caliph would often present a robe of honor, called a khil’a, to a man that the government wanted to esteem. The practice of giving robes of honor is described in many books from the time period, notably in the popular Thousand and One Nights. Members of the royal entourage wore the special robes of honor on official occasions.

The caliph al-Mansur (r. 754-775) is usually credited with establishing the custom requiring court bureaucrats and administrators to wear honorific robes of the color black for ceremonial affairs and events. Black became the official color of the Abbasid people, who were acknowledged in China and Byzantium as the “black-robed ones.” High-ranking military officers were clothed in every kind of black. Instead of using dissimilar colors, the men were distinguished by the style of military belt and sword that they wore. Honorific garments, royal flags, and official document cases were all black, and usually made of silk. The black garment materials were mainly colored by dye, and a court chamberlain of the 10th century recollected how a perspiring official would have to wipe the black dye from his turban cloth off his face.

Despite dripping dyes, the high fashion of the court was much more extravagant and lavish than that of commoners. The clothing of everyday laborers was made out of cheaper materials, such as wool. Commoners generally used less fabric, often unable to afford to wear many layers of garments, which was popular practice among elites. Sailors, fishmongers, and bathhouse attendants worked only in briefs. The clothing of the working class was commonly shorter than the clothing of members of the court. Those workers who wore tunics often wore knee-length ones.

There is less recorded information about the attire of the general populace than there are descriptions of elegant and courtly dress. One of the detailed accounts of elite dress was written by Abu al-Tayyib Muhammad al-Washsha (d. 936) who described clothing worn by fashionable people in his book On Elegance and Elegant People. Washsha provided detailed information about elements of fashion and vogue attire. Elegant people should not wear clashing hues or distasteful colors, such as saffron. It was improper to wear dirty outfits, new clothes together with washed ones, or linen with certain cottons. Fashionable men wore clothes perfumed with scents such as powdered musk or rosewater solution. They should never smell of ambergris, the perfume of slave girls. Men’s shoes and sandals could be made of various leathers and have different colors and designs. Examples of footwear included East African sandals, thick shoes from Cambay in India, Yemeni furry shoes, and Hashimi boots. Elegant women would not wear black, green, pink, or red, except for fabrics that were naturally those colors, such as red silk. Women’s clothing would be perfumed with musk, sandalwood, hyacinth or ambergris, but no other scents. Footwear included furry Cambay shoes, boots of the style of Persian ladies, and curved shoes.

Yellow was one color fashionable people were to avoid wearing. This may be partly due to its association with the dress regulation required of non-Muslims during the Abbasid period. At the time, laws of differentiation, or ghiyar, existed concerning the dress of non-Muslim subjects, called dhimmis. The laws and their enforcement varied during the reigns of different caliphs. Most notably, al-Mutawakkil issued strict edicts about dress regulations. He required that Christians, Jews and Zoroastrians wear yellow shawl-like head-cloths, called taylasans, and a distinguishing belt, called a zunnar. If they wore turbans, then those were also required to be yellow in color. The slaves of non-Muslims also had to wear identifying clothing. Among other regulations, they had to attach yellow-colored patches to their garments. It is not definitively known for how long these explicit set of laws put forth by al-Mutawakkil were enforced. The caliph al-Muqtadir (r. 908-932) did follow suit by issuing similar regulations early in his reign.

Thus, during the Abbasid period, the notion of fashion as an indicator of class and status was significant. Clothes served as a marker of social position, whether distinguishing between Muslims and non-Muslims, courtly elite and commoners, or the rich and the richer. Those with the most resources, be it power or possessions, set the trends of fashion for the rest of the community. These trends included Persian inspired garments as well as attire acquired from foreign lands. Accordingly, fashion was a thriving industry during the Abbasid period that was also strictly regulated either by law or through the accepted elements of style.