Khalid ibn Barmak (d. 780) was a man of Persian ancestry who became prominent among the leaders of the Abbasid revolution. Khalid was responsible for the division of plunder collected in war and payment of the troops. The first Abbasid caliph, Saffah (r. 749-754), appointed Khalid as manager of the diwan, or register, of the army and the register of the land tax. At the time, the army registers were in the form of scrolls, and Khalid was the first one to replace the scrolls with ledgers. Khalid won the confidence of Saffah and became his principal adviser. Later, during the reign of Mansur (r. 754-775), Khalid was director of land taxation and he advised Mansur on the layout of Baghdad. With responsibilities such as these, Khalid made his career in court bureaucracy. 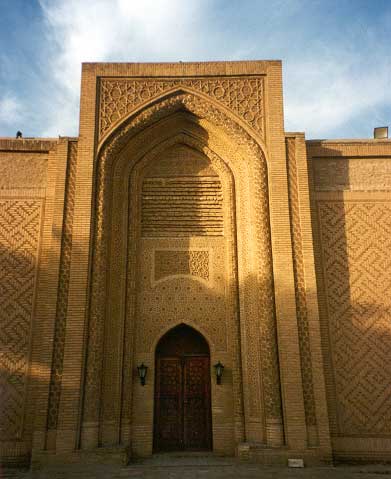 The dangers of a court career

A distinguished court career like Khalid’s was never secure. There is a story about Mansur becoming suspicious of Khalid’s wealth. Mansur demanded that Khalid pay him the great sum of 3,000,000 dirhams. Khalid had to turn to his friends to lend him money in this urgent emergency, and many of the men helped him pay the enormous sum. The story reflects not only the insecurity of court life but also the importance of networking and friends within the court bureaucracy. Despite the risky nature of the job, when Khalid died in 780A.D. his son, Yahya, was already establishing himself within the administration.

Yahya ibn Khalid (d. 805) served during the reign of Mahdi (r. 775-785). He gained prominence by assisting his father and also as a tutor of the prince Harun al-Rashid (r. 786-809). During the short reign of Hadi (r. 785-786), Yahya was thrown into jail because he stood against Hadi’s efforts to remove Harun as successor to the caliphate. Yahya was released from prison following Hadi’s sudden death. After Harun’s accession to the caliphate, he appointed Yahya as his vizier, or secretary (a title similar to what is referred to today as a ‘secretary of state’ or ‘secretary of labor’). It is written that when Harun appointed Yahya as vizier he said “I have invested you with the rule of my flock; removing the burden from my shoulders to yours. Govern them as you think right…. Conduct all affairs as you see fit” (Kennedy, 63).

As Harun’s vizier, Yahya had a large degree of authority when performing governmental duties. He chose is own ministers and, in Harun’s absence, he built dykes to protect areas of Baghdad threatened by flooding of the Tigris. Harun trusted Yahya to such an extent that he not only made Yahya responsible for sending out caliphal letters, he also handed his personal seal over to Yahya. These duties were of great importance because, from the beginning of the Abbasid regime, the post, known as the barid, was one of the most important governmental services.

Harun had great confidence in Yahya’s advice on matters of critical importance. Harun went through a great deal of unsettled contemplation over whom he would pass the caliphate to – Ma’mun (r. 813-833) or Amin (r.809-813). Harun decided to discuss and debate this matter all night with Yahya until they had resolved by morning that the caliphate would pass to Ma’mun after Amin.

Yahya’s duties made him the public representative of the Abbasid government and he trained his two sons, Fadl and Jaʿfar, to follow in his footsteps. Yahya and his sons would sit and receive petitions every day, often staying into the night to deal with the affairs of the Abbasid people. Both sons took on their own personal duties in addition to the ones they shared with their father. During his life, Fadl (d. 808) was placed at the head of the western provinces of Iran. Additionally, he was appointed governor of Khurasan, where he built mosques and frontier fortresses. However, Fadl ultimately displeased Harun and was divested of all his offices except his role as a tutor. The other brother, Jaʿfar (d. 803), was granted charge of the caliphal bodyguard for some time. He was also entrusted with the direction of the post office, or barid, as well as the offices of the Mint and textile manufacturers. Jaʿfar is perhaps best known because of his characterization as Harun’s loyal minister in the tales of the Arabian Nights.

Contribution to Art and Culture

The bureaucratic achievements of the Barmakids were accompanied by cultural and artistic endeavors. The men of the Barmakid family that served during the Abbasid caliphate were patrons of poetry and they contributed to the architectural grandeur of Baghdad during the early Abbasid period by building numerous palaces. The most notable of these palaces belonged to Jaʿfar and subsequently became the residence of the caliphate. Yahya used his family wealth to become a patron of science. He was especially interested in Indian scientific and medical learning. It is recorded that he sent a man to India to bring back plants used in Indian medicine and he paid an Indian scholar named Manka to translate an Indian medical book into Arabic. The Barmakids also gathered philosophers and theologians in their home for a type of assembly meeting. These private gatherings presented a forum in which ideas could be discussed in complete freedom. A story is written of one get-together in which Yahya asks “famous controversialists chosen from among Muslim theologians, free-thinkers and divines of various sects” to define what love is (Masʿudi, 109).

Despite all of these amazing achievements and contributions to the Abbasid court and caliphate, the period of Barmakid power had a tragic ending. There are many differing stories concerning the fall of the Barmakids (these can be further read about in the resources listed at the end of this article). Yet, the importance of the fall is its reflection of two important themes within the Abbasid court administration: instability of power and lack of security. This is best exemplified by the fact that Harun, the caliph who entrusted Yahya and his sons with important responsibilities and immense authority, ordered the destruction of the Barmakid family.

The Barmakid family in verse

According to one unnamed poet, Harun owed his success to the Barmakids (Mas’udi 108):

Let the caliphate of Rashid be praised,
For he has drawn tight the reins of power.
He added a second reign to a first,
And this was due to Ja’far alone.
The sons of Barmak have established his dominion.
And made the throne secure for his heir

Another poet viewed the fall of the Barmakids as a warning to those with power. After the fall, the following verse was written on the gate of the castle in Khurasan (Mas’udi, 121):

The unhappy sons of Barmak
Are stricken down by fate
May their destiny serve as a warning
To the ones who dwell in this palace!

Many poets lamented the loss of the Barmakids and wrote verses in tribute to their achievements. One such verse written by Ashjaʿ al-Sulami (fl. 8th century) goes as follows (Mas’udi, 124):

The Sons of Barmak have departed this world,
But had they continued in power, men
Could not have profited more.
The days of their supremacy were
A perpetual feast for all mankind

In relation to their administrative duties within the court, there is one significant fact that must be revealed about the fall of the Barmakids. It is understood that after their fall the mail piled up in sacks.